Why I’m changing my name

It’s pretty normal to change your name when you get a divorce. However, what do you do when your name is also your personal brand, your pen name and moniker?

That was the question I faced when I divorced, so I didn’t change my name. It all seemed too hard.

However, a year or so later my ex-husband remarried and his wife took on his name. After that, it just seemed weird to keep it.

So, this year, when I started writing my new book with the working title “Possible: How to create a vision for your life” I decided it was time to do a total rebrand.

I’ve been called “Cas” as a nickname since high school, but truth be told, I’ve never liked that name. It was easy to say with a longer last name but now that I’m choosing a new last name, it’s also an opportunity to change what people call me.

So, earlier this year I started asking people to either call me “Caroline,” my proper name or “Cara.”

Growing up my last name was “Sag.” When I looked into my family history, it was clear that there was no reason for the existence of this name. In Hungarian, it isn’t even a word but rather the end of a word like the “ed” on ended. My great grandparents had chosen this name after they were allowed to take on Hungarian names (previously Jewish people weren’t allowed to take on Hungarian names). The original family name was “Stern”.

I did think about taking that name on, but then, after thinking about it, decided that it would be more fitting to create a new name. I wanted to honour my Hungarian heritage, so I made a list of Hungarian words that resonated with who I am creating myself to be now. The word I settled on was “Szellemes” which means “Spirited and witty.”

So, in a couple of months time, I will officially be named Caroline (Cara) Szellemes.

It isn’t easy to change your personal brand, even if changing your name just means filling out a few forms. Everybody knows me as Cas McCullough and I’ve had my domain for over 20 years now. Where do you even start?

Well, I start here, by sharing this with you.

Over the next few months, I will transition everything, including my book to be under my new name and this domain will redirect to a new domain. In time, people will get used to the new name and so will I.

And like most decisions, this isn’t just about a name. I am declaring my freedom, declaring who I am in life and declaring it boldly!

If you could change your name to a word that describes who you are, what would it be for you? 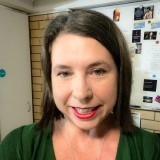